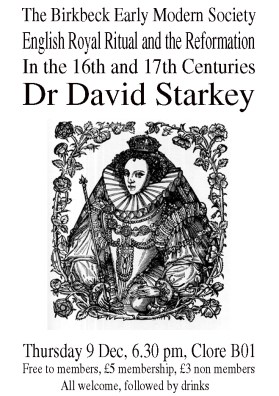 We are delighted to invite you to our Christmas event. Dr David Starkey CBE, FSA, is an Honorary Fellow at Fitzwilliam College, Cambridge, and probably Britain’s best known public historian. He has written and produced programmes for Channel 4 on Henry VIII

, as well as the English and British monarchy, and is a regular guest on the BBC’s Question Time. He is an expert on the Tudor royal court and his PhD, which was supervised by Prof. Geoffrey Elton, examined the king’s privy chamber between 1485-1547. We are sure that David Starkey will deliver a stimulating, humorous and provocative lecture on 9 Dec, so please arrive early to be sure of a place!

Membership can be obtained at any of our events and remains a bargain at £5 for the academic year.